Cleveland Chosen to Host the Truly Outrageous Jem Con in 2018

Westlake, OH November 6, 2017 – After an intense bidding process, the Cleveland region has been chosen as the official host site for the 14th annual Jem Con, a weekend long festival celebrating the beloved Jem and The Holograms cartoon. The cartoon may have aired over 30 years ago but it’s maintained its robust fan base, while bringing in new fans thanks to reruns syndicating on Netflix and The Hub as well as its critically acclaimed IDW comic book series and Integrity collector toy line.

The comic series, which launched in 2015, has received numerous awards and praise for featuring a female lead cast along with gay and transgender characters. It was so successful that a spin off series was launched this year and the Integrity toy line has also seen success with its first doll Hollywood Jem selling out within two days of appearing at San Diego Comic Con in 2013. Integrity’s license is expected to expire within the year, leaving the fate of future Jem merchandise efforts up in the air.

Given the current success of the Jem comics along with the relatively unknown future of any licensed Jem merchandise, the 2018 Jem Con is expected to be one of the most anticipated shows since the event first launched back in 2005. Fans gather from all over the world each year with some travelling from as far as The Netherlands to connect with other fans, discuss the show and the larger brand, and meet special guests who were involved with the show.

“I am thrilled to have this wonderful event come to Cleveland, the home of rock and roll,” said 2018 Jem Con Chair Rachel Pankiw, “We have some amazing guests lined up who were involved not just with Jem but all the major shows and brands from the 80s and 90s. It’s going to be an outrageous weekend.”

The show was part of the Saturday Morning cartoons line up in the late 80s and followed the lives of main character Jerrica Benton, a young music executive who supported a foster home for girls, along with her alter ego “Jem” and her band the Holograms. The series was a joint collaboration between Hasbro, Marvel Productions, and Sunbow Productions, which also developed Transformers and GI Joe.

Several special guests have already been confirmed for 2018, including:
-Christy Marx, the show’s creator, former writer for Marvel Entertainment and Zynga
-Samantha Newark, the speaking voice of Jem/Jerrica Benton
-Keith Tucker, a Daytime Emmy award winning storyboard artist for the show who also worked for Marvel Productions on hit shows including Teenage Mutant Ninja Turtles, TinyToons, Animaniacs, Pinky and The Brain, XMen, SpiderMan and His Amazing Friends, and GI Joe to name a few 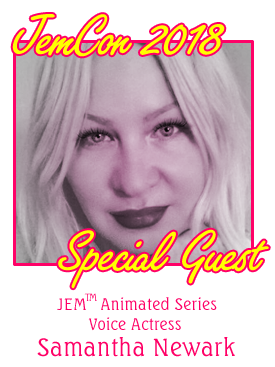 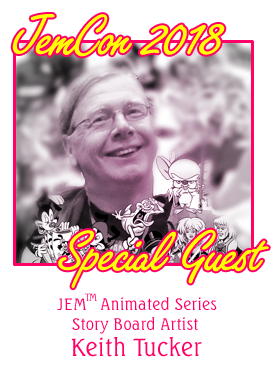 Where:
JemCon 2018 will take place at The Double Tree Hilton-Cleveland Westlake, which is the official hotel for the convention. Additional information can be found here: http://jemcon.org/?q=content/jemcon-2018-click-clash-cleveland

Vendors:
A limited number of vendor slots will be available for companies who wish to sell merchandise on site. Additional information can be found here: http://jemcon.org/?q=vendors

Sponsors:
The event is accepting applications for sponsors or businesses who wish to be involved with the event. For more information please contact the 2018 Chair .

Charity Auction:
Giving back to the community was a big part of the show and as such every year JemCon receives memorabilia for a charity auction and donates the proceeds to a designated charity. It is currently looking into charities for 2018.

Donations go straight to Alex Hanselka who graciously provides hosting for us and never touch the hands of any administrator, staff or any users of this website.